Eucharistic Participation: The Reconfiguration of Time and Space


The Church's engagement with the world - Witnessing as the Church's method

This is a development of what we see in I Corinthians But which body is which? Both the eucharistic body and the ecclesial body are sacramental, in that they are signs which point to Christ, and in doing so convey his life. But what is the relationship between these three bodies? In short, the Eucharist makes the Church. Even Scripture was read sacramentally, as a sign pointing to Christ through which we receive Christ. This means that every part of it had a mystical meaning; there are deeper connections which the Holy Spirit illuminates.

We see these moments of illumination in the history of interpretation: to read the Scriptures sacramentally is to put a great emphasis on the tradition of reading the Scriptures.

For de Lubac, however, in the mid-Medieval period, with sociological and philosophical changes afoot, a shift occured. Increasingly, God became distant, and even arbitrary. 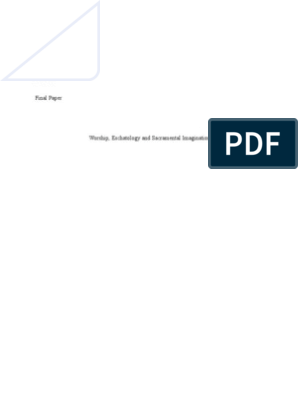 Who could read the mind of God? Arguments about authority — over who could speak of God — arose. For the first time, the authority of Scripture and the authority of the Church were put in opposition: no longer could the allegorical way of reading Scripture with the Church tradition be trusted, only the plain sense which anyone could read. It was this which caused the Reformation: which authority do we listen to? What of the Protestant heritage?

The Reformation did bring about a much needed reform, and returned theology to its roots in the Scriptures, but at the same time it accentuated even further the division that had sprung up. The Reformation, for Boersma, was something of a tragedy, the wounds of which need to be healed.

His Protestant credentials have previously been impeccable, with some excellent studies of the Puritan divine Richard Baxter. And not just anyone can become the JI Professor of Theology. Evangelicals must once more acknowledge the work of the Holy Spirit in the interpretation of Scripture through the tradition; this means no longer ignoring allegorical readings. We see a similar move to Boersma in the writings of Eugene Peterson, another theologian who argues for a spiritually-minded theological reading of Scripture.

Liturgy and ecclesiology become important subjects once more. Smith has argued that Evangelicals need to take seriously the sacramental role of the body in the liturgy. Ressourcement brought new life to the increasing tiredness found in much Catholic theology. Boersma hopes that a similar thing may happen in turn for the Evangelical world.

You are commenting using your WordPress.

Proving the True Presence of The Eucharist (Short Version)

Plato It was de Lubac in particular who began to articulate this. Allegorical readings of Scripture are about reading it Christologically For de Lubac, however, in the mid-Medieval period, with sociological and philosophical changes afoot, a shift occured. The book presents these two presentations in print.

It deals with the question of the importance of the Eucharist, and it challenges Protestants and especially evangelicals to think and to treat the Eucharist more seriously than we sometimes do. In particular, I re-address the two issues of the Lord's Supper as sacrifice and as real presence.


These were the two issues central to the Eucharistic debates of the Protestant Reformation. This booklet is written from an attitude of sympathy with the motivations and concerns of the Reformers. At the same time, I suggest that it is possible to get beyond the disagreements of the Reformation period.